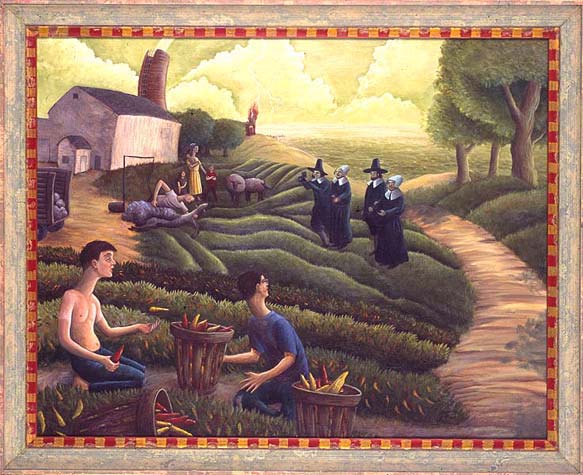 Now that William Penn’s proposal had become reality, he now had to demonstrate the practical skills of a real estate promoter, city planner, and governor for his “Holy Experiment”, the Province of Pennsylvania, to work.

Besides achieving his religious goals, Penn had hoped that Pennsylvania would be a profitable venture for himself and his family.  But he proclaimed that he would not exploit either the natives or the immigrants, “I would not abuse His love, nor act unworthy of His providence, and so defile what came to me clean.”

Though thoroughly oppressed, getting Quakers to leave England and make the dangerous journey to the New World was his first commercial challenge.  Some Quaker families had already arrived in Maryland and New Jersey but the numbers were small.  To attract settlers in larger numbers, he wrote a glowing prospectus, considered honest and well-researched for the time, promising religious freedom as well as material advantage, which he marketed throughout Europe in various languages.  Within six months he had parceled out 300,000 acres to over 250 prospective settlers, mostly wealthy London Quakers.

Through Penn’s efforts, the first permanent Mennonite settlement is formed in Germantown in 1683.  Germantown was originally six miles north of Philadelphia, which Penn founded one year prior.  Over the years Germantown has been absorbed into the expanded city limits of Philadelphia.  The settlement initially consisted of one Mennonite family and twelve Mennonite-Quaker families who arrived from Krefield in what is now Germany.

Penn also traveled up the Rhine River valley in 1695, promoting Pennsylvania to the persecuted Mennonites.  He wanted his “Holy Experiment” to be a melting pot for all peoples regardless of race, creed, or color.

In April 1710, William Penn wrote a letter to the British Ambassador in the Netherlands stating that “there were fifty or sixty Swissers, called Mennonites, coming for Holland in order to go for Pennsylvania.”  They arrive in Philadelphia on September 23, 1710 aboard a ship called the Maria Hope.

The ship carried a total of 94 passengers, among them about 40-50 were Mennonites.  Part of this group of Mennonites settles in the Skippack area (today in Montgomery County, PA) while the others settle near the Pequea Creek (upstream from the village of Conestoga near the modern day village of Lampeter in Lancaster County).

Included in the list of settlers is Hans Herr,1 his wife Veronica Brackbill and their children, and Martin Kendig, his wife, and child.

We specifically make mention of Hans (John) Herr, and Martin Kendig.  They were land agents acting on behalf of William Penn and promoted Penn’s Woods and his ‘Holy Experiment’ to their friends and families who were living in exile along the Rhine River north of Switzerland.  And Veronica Brackbill’s father was the renowned Mennonite pastor and leader Benedict(us) Brechbuhl/Brackbill who was instrumental in both securing aid to his fellow Anabaptists and searching for new locations for them to emigrate to.

Benedict Brackbill was a leader on this 1710 Rhine journey of Mennonites exiled forceably from Canton Bern.  Of 57 persons on this boat, about half who were sick or feeble were left behind at Mannheim, March 28.  The remaining 28 or 29 came to Nijmegen, Holland on April 6.  Here all were released by the Dutch authorities at once except Brackbill and two others who were taken before the authorities and then released April 9.  At Nijmegen they contacted the Mennonite congregation there, who gave them help.  By May 17th, Brackbill’s wife and children were also out of Switzerland.  From this time until 1717, he worked in the interests of the Swiss exiles.  He contacted the Dutch Mennonites, and appealed for material help from them.  He also appealed to the Dutch government officials, seeking their help.  He traveled extensively, looking for a place to settle the Swiss exiles.  He made many journeys to Amsterdam and Rotterdam.  Among places open to them were northern Germany, in the swamps or places depopulated by the plague, and Lithuania, where he visited and was received on his return, by King Frederick I of Prussia.  He (Brackbill) was enthusiastic about this place, only objecting to the type of houses.  In spite of his enthusiasm, he could interest none of his Brethren in this venture.  Another place that interested him was the East Indies, and the East India Company made overtures to them.  During these years none of the (Swiss) Brethren seemed to be interested in America.

Next:  VI. Departure for The New World

Note:
1. There is debate and conjecture as to whether or not this is pastor and patriarch Hans Herr. The general conclusion is that it is not; that the above mentioned Hans (John) Herr might be the patriarch’s son. There is some conjecture that the patriarch came to North America in the 1717 migration.