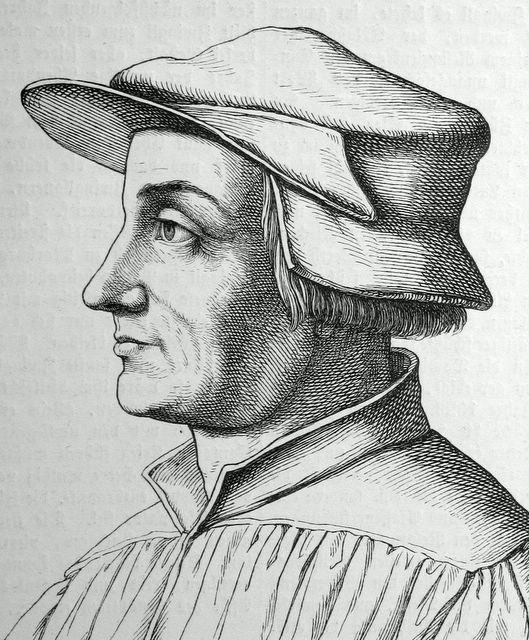 IV.   The Protestant Reformation in Switzerland

Huldrych (or Ulrich) Zwingli started the Swiss reformation at the time when he was the main preacher in Zurich at the Grossmünster church.  He preached systematically through the Gospel of Matthew, which was a considerable departure from almost every other priest that preached through the liturgical cycle of readings issued by the Catholic Church.

In the following two years, profound changes took place in Zürich.  The Church was thoroughly secularised.  Priests were relieved from celibacy, the opulent decorations in the churches were thrown out.  The state assumed the administration of Church properties, financing the social works (which up to then were managed entirely by the Catholic Church), and also paid the priests.

In his first public controversy in 1522, he attacked the custom of fasting during Lent.  In his publications, he noted corruption in the ecclesiastical hierarchy, promoted clerical marriage, and attacked the use of images in places of worship.  In 1525, Zwingli introduced a new communion liturgy to replace the Mass. Zwingli also clashed with the Anabaptists, which resulted in their persecution.

He lived and preached in Zurich from 1484 until his death in 1531 at the defeat of Zurich in the second war of Kappel.

Some followers of Zwingli believed that the Reformation was too conservative, and moved independently toward more radical positions, some of which survive among modern day Anabaptists.  One famous incident illustrating this was when radical Zwinglians fried and ate sausages during Lent in the Zurich city square by way of protest against the Church teaching of good works.  Other Protestant movements grew up along lines of mysticism or humanism, sometimes breaking from Rome or from the Protestants, or forming outside of the churches.

Next:  V. The Radical Reformation