A Heritage to learn from, preserve, promote, and pass on 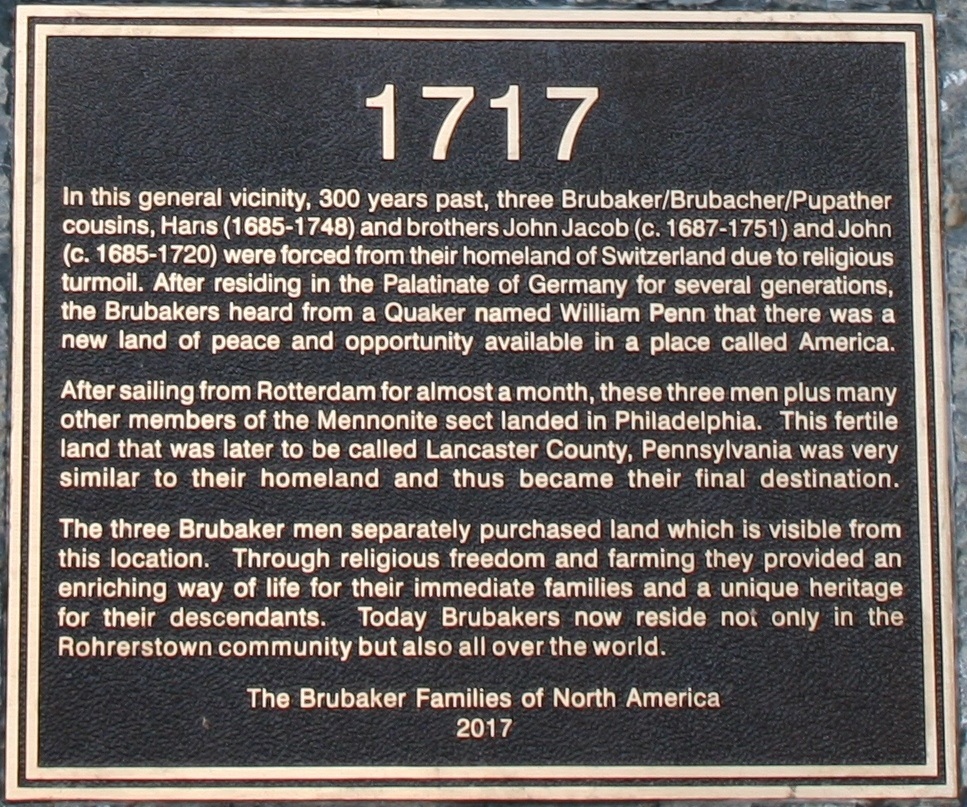 This plaque, on a Lancaster County limestone rock monument, was unveiled on August 5th, 2017 in a park on what was originally ‘B’ branch line Brubaker family lands. It commemorates the 300th anniversary of our ancestors’ journey to a new life in the New World.

Below are the welcoming remarks at the start of the 300th Anniversary Monument Dedication Ceremony at Noel Dorwart Park on August 5th, 2017 by Doug Brubaker, East Hempfield Township Supervisor and Vice-Chair of the Executive Board of the Brubaker Families of America: 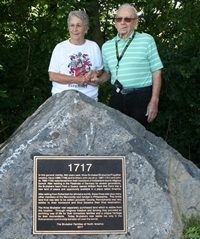 Good morning, and welcome to this very special event. Where we are and what we are doing this morning started out as a cousin’s dream almost a decade ago, and today it culminates in reality.

William Penn who, as much as anyone, had probably the greatest impact on our larger family having emigrated to the New World, and specifically to this area. Because of the dreams of our forebears and Penn’s vision, our larger family had the opportunity, rooted in the pursuit and blessing of freedom, to become what we have become today. Each one of us here, and our many cousins in the larger Brubaker and Brubacher family throughout North America, have had the benefit of reaping the blessings that we have gained because of our ancestors’ dreams and Mr. Penn’s vision for a peaceful, prosperous, free, and tolerant Commonwealth of Pennsylvania.

It was Mr. Penn who said “A nation is not great by virtue of its wealth, but by the wealth of its virtue.” Our larger family has benefitted greatly over the years from the freedom and opportunity, rooted in a Godly foundation and heritage that this Commonwealth at its founding and this Continent have afforded us. Many of us have been blessed in many ways, and have, in turn, been a blessing to others in the multitude of skills, talents, trades, and vocations that we have taken on as our own. We have also branched out to make homes for ourselves all across North America. Because of those blessings, we have been able to provide for ourselves and others, and have provided an infinite number of touchpoints in service to the world both professionally and voluntarily.

Today in this 21st century, and also 300 some-odd years since Penn first commenced with his ‘Holy Experiment’, our Nation here in the U.S., this Continent, and much of Western Civilization is at a crossroads. I do not stand here to criticize or to give solutions or answers. I do, however, stand here asking that as we continue with this ceremony and with this greater celebration weekend that we pause for a moment. Consider where we as individuals, families, and branches of the larger Brubacher and Brubaker tree have come from. That we ponder for a moment what led our ancestors to this New World, and what sustained them. What was it that they passed on to us? What are we doing to preserve that; to promote that; and pass that on, both to our peers and our progeny?

Let us do our part to learn, teach, and pass on those virtues that provided so much freedom and opportunity for us. Let’s do it for the benefit of our descendants, and also for the preservation and promotion of the principles and freedoms that have made many of the nations of this continent free, prosperous, and the envy of the world.

As it has been written, if we do not learn from history, we are doomed to repeat it. Again, let’s remind ourselves of those virtues, embrace them, and pass them on.

As we progress with this dedication ceremony and our larger celebration weekend, let’s remind ourselves of who we are and where we came from. Let’s celebrate the blessings that we have had bestowed upon us, and do our best to pass them on, not only to our younger family members, but to our neighborhoods and the larger world around us.