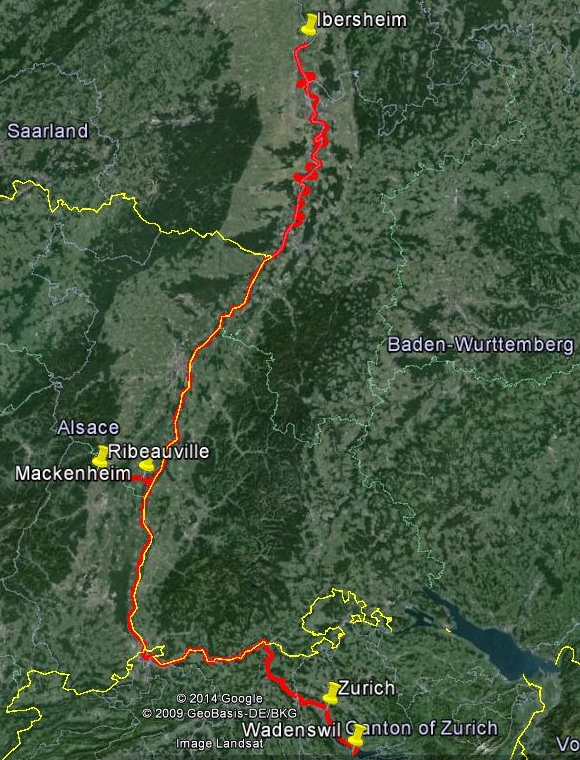 Farmland outside of Hirzel, much like it was in Petter Bruppacher’s day.
Photo credit: James G. Brubaker.

In the previous post we mentioned Petter Bruppacher. He was a farmer and preacher; the grandson of one of the earliest known Brubaker ancestors, Rutschli Brupbacher (born around 1540), having been an Anabaptist since 1622 when he joined the Brethren church. A widower, he lived on a farm outside the village of Spitzen in the nearby parish of Hirzel, south of Zurich and southwest of Lake Zurich. The local Brethren congregation typically met in his house. On May 3, 1637, he was imprisoned in Wadenswil with Hans Landis and Jacob Rusterholz, who later escaped. Later, Petter was brought to the prison at the Oetenbach1 Cloister in Zurich where he was incarcerated for more than forty weeks, until sometime in 1638 when he escaped with twelve others. The officials of Wadenswil searched for him, but never found him. As a fugitive, he fled to Alsace alone in 1648, where he lived for thirteen years, before eventually emigrating north to Ibersheim, in what is now Germany.

In his absence, Petter’s second wife, Anna Pfister, died in 1639.  Their three sons, Hans Heinrich (thought to be an ancestor of the ‘A’ and ‘D’ families of Brubakers in America), Peter, and Hans Jacob (thought to be ancestor of the ‘B’, ‘C’, and ‘E’ families of Brubakers in America), aged between nine and thirteen years at the time, remained on the family farm in Spitzen.  However, on May 6th, 1640, while he was in exile and his wife had been deceased for several months, his farm and possessions were confiscated.  The children were taken to the orphanage at Oetenbach Cloister in Zurich where they would live and be schooled.2  Their expenses were paid for with the confiscated fortune of their father and late mother. For about two years Petter and Anna’s three sons are housed and educated at Oetenbach.  Hans Heinrich eventually learns the glassmaking trade in Richterswil while Peter and Hans Jacob are sent to live with foster parents in Wadenswil.  When Peter and Hans Jacob are a little older, Peter trains to become a barber and surgeon while Hans Jacob learns to become a shoemaker.  The two younger brothers learn their trades in Mannedorf on the eastern shore of Lake Zurich in the mid 1640’s.

By 1651, expenses for the sons paid out of the family fortune were no longer initiated.  Sometime after 1651 records show that father Petter had taken a third wife, Margaretha Strickler by this time and his three sons by the late Anna Pfister had moved to Alsace to join him and Margaretha.  Hans Heinrich was married to Elizabeth Rusterholz, daughter of Jacob, who previously had been a fellow prisoner with Petter.

In the decade of the 1650’s, in the aftermath of the 30 Years’ War, the area around Alsace east toward the Rhine River and in Palatine Germany, the region had been devastated.  The French rulers in the Alsace region and likewise the electors and other officials across the Germanic border were offering incentives, tax breaks, and good farm land that had laid fallow for several years.  The Brethren were welcomed and tolerated because there was a desperate need for skilled farmers.  Sometime in the late 1640’s  Petter Bruppacher is reunited with his three sons when they join him.  In 1649 they enter into a 12 year lease and rent a farm near the village of Mackenheim, just on the west side of the Rhine River.

After the expiration of the Mackenheim lease in 1661, Petter, his wife Margaretha, and sons Hans Heinrich and his family, and  Hans Jacob, with his wife (thought to be Klianna) Hiestand and their two children, left the Alsace region for Ibersheim, in what is now Germany.  They were part of a group of people who received a twelve year lease from the Elector of the Palatinate for the entire crown estate of Ibersheim. Reproduction of the demand letter from Hans Heinrich and Hans Jacob Bruppacher.

Continuing in 1661, Hans Heinrich Bruppacher, who was by now also living in Ibersheim with his wife and children, along with brother Hans Jacob and his family, wrote a letter to Elector Karl Ludwig, requesting his intercession with the authorities on their behalf to recover their late mother’s inheritance in Wadenswil. Their other brother, Peter had by now died and thus was not involved in this endeavor. They were not successful in recovering anything as the authorities required one to renounce the Anabaptist faith in order to be considered for a distribution of inheritance.

Again in 1663 Hans Heinrich travels to Zurich to make one last attempt to claim the remainder of family’s inheritance that had been confiscated by the authorities after his mother’s death.  He is once again denied.  Five years later, in 1668, his father, Petter Bruppacher dies at age 72 and is buried in Ibersheim.  At that time, the remaining value of the family estate is permanently absconded by the Zurich authorities because Petter had died in ‘disobedience’ for refusing his Anabaptist beliefs.

According to the research and documentation of Jane Evans Best, only tradition and circumstantial evidence is available to suggest a link between Peter Bruppacher (1595-1668) and the ‘A’ and ‘B’ Brubaker families in North America.  Definitive proof is yet to be found.

The father of A-1 Hans (John) Brubacher was born in nearby Canton Zurich.  He died in Ibersheim too, however, his son Hans emigrated to the New World in 1717, eventually settling in what is now East Hempfield Township, Lancaster County, PA.