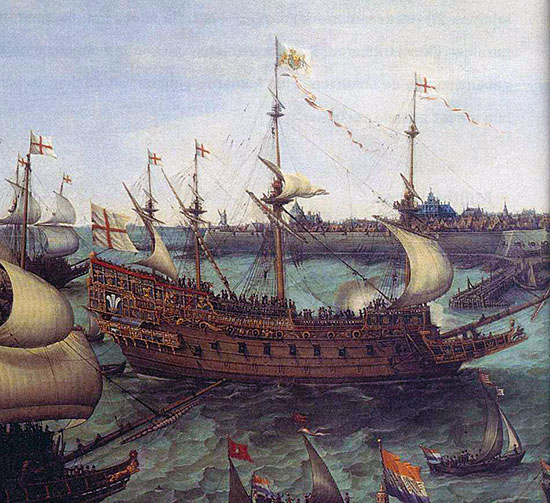 On Tuesday August 24th, 1717 three ships arrive at the wharf in Philadelphia. After a ten-to-twelve week journey, the ancestors of the Brubaker families in North America, among 363 Mennonite immigrants have arrived in the New World.

What might they have been thinking? Where did they go and with whom did they stay those first days in this New World?

While we don’t and may never know where they went and who they stayed with, we do know that they would have quickly embarked on their trek west to what was then western Chester County. Lancaster County and Hempfield Township (now East Hempfield Township) would not be established until 12 years later, in 1729. Area of the original 1717 land patents for the ‘A’, ‘B’, ‘C’, Hershey, and Swarr lands.
Image created with Google Earth. Click on image for larger view.

Records show that on September 27, 1717, just 24 days after landing in Philadelphia, Hans Pupather/ Bruppacher (1685 – 1748) obtained a warrant from the Penn Family for 1,000 acres jointly with Christian Hershey. The property is surveyed on October 14, 1717. Hans and Christian pay for the property in full – 100 British pounds (or roughly 49 US cents per acre) – on November 6, 1717. The patent for this land is issued on November 30, 1717. Hans and Christian divide their 1,000 acre rectangular plot in half, Hans takes the southern 500 acres and Christian takes the northern 500 acres. On September 27, 1717, Hans’ cousin, Jacob Bruppacher (1687 – 1751) obtains a warrant from the Penn Family for the adjoining 700 acre rectangular plot just to the north. This property is also surveyed on October 14, 1717. It is unknown when he makes the payment of 70 British pounds to purchase the property, but the patent for this land is issued on November 28, 1717. He buys this land jointly with his brother John Bruppacher and a third partner named Peter Swarr. Jacob secures the 222 acres west of the Little Conestoga Creek. John Bruppacher and Peter Swarr split the land east of the creek, with John Bruppacher receiving 328 acres and Peter Swarr receiving 150 acres. Warrant map of East Hempfield Twp. The original Brubaker lands can be seen in the lower right portion of the layout. The name is spelled on this map as ‘Pupather’.
Click on image for larger view.

Immediately after purchasing the 1000 acre homestead farm, Hans (A-1) and his wife Anna Ernst Bruppacher (1690-1759) build a mill for grinding grain and sawing wood. The mill is built along the southern edge of his property where modern day Columbia Avenue crosses over the Little Conestoga Creek. This mill is the first one in this part of Lancaster County and the first one along the Little Conestoga Creek. Click here to read more about the mill.

Hans soon attains a position of standing and respect in the community. He is one of six men appointed to lay out a road from the Susquehanna River to Christian Stoneman’s mill and from there to “Daniel Cookson’s” at the head of the Pequea Creek. According to the proceedings of the Court of Quarter Sessions Hans is appointed constable in 1724 for the Donegal district of Chester County and in 1729 for the newly formed Hempfield Township, in which most of his 1000 acre tract resides, also of the newly formed Lancaster County.

While Mennonites are not known to be particularly active in civil and government-affiliated affairs, including taking up arms and serving in the military, one might conclude that the acceptance of public appointment by Hans might show him to be irreligionist or not particularly committed to his Anabaptist Mennonite beliefs. According to Gibble, however:

“…we do not believe that he was out of sympathy with the Mennonite view. That he accepted such appointment rather reluctantly and did so only, in this very early period of affairs in Lancaster County, by considerable pressure on the part of his neighbors and friends.

Although he accepted office he is not listed among those who were summoned as grand jurors in the year 1730… …this may serve as proof that he did not care to be too deeply involved in legal and civil matters.”

Next:  VIII. The First Brubachers in Canada