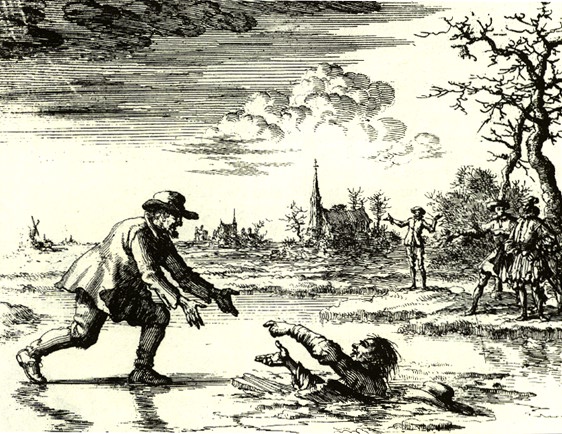 Anabaptists are Christians of the Radical Reformation of 16th century Europe.  Although some consider the Anabaptist movement to be an offshoot of Protestantism, others see it as a distinctly separate movement.  The Amish, Hutterites, and Mennonites are direct descendants of the movement.  Brethren, Bruderhof, and the Apostolic Christian Church are later descendants.

The name Anabaptist is derived from the Greek term anabaptista, or “one who baptizes over again.”  This name was given them by their enemies in reference to the practice of “re-baptizing” converts who “already had been baptized” as infants.  Anabaptists required that baptismal candidates be able to make their own confessions of faith and so rejected baptism of infants.  The early members of this movement did not accept the name “Anabaptist”, claiming that since infant baptism was unscriptural and null and void, the baptizing of believers was not a “re-baptism” but in fact the first baptism for them.  Early Anabaptist leader Balthasar Hübmaier wrote:

As a result of their views on the nature of baptism and other issues, Anabaptists were heavily persecuted during the 16th century and into the 17th by both Magisterial Protestant Reformers and Roman Catholics.

While most Anabaptists adhered to a literal interpretation of the Sermon on the Mount found in the Gospel of Matthew which precluded taking oaths, participating in military actions, and participating in civil government, there were some who practiced re-baptism who felt otherwise.  They were thus technically Anabaptists, even though conservative Amish, Mennonites, and Hutterites and some historians tend to consider them as outside of true Anabaptism. Conrad Grebel wrote in a letter to Thomas Müntzer in 1524:

True Christian believers are sheep among wolves, sheep for the slaughter… Neither do they use worldly sword or war, since all killing has ceased with them… It is from this group that our Brubaker-Brubacher forebearers came from.

Anabaptism in Switzerland began as an offshoot of the church reforms instigated by Ulrich Zwingli.  As early as 1522 it became evident that Zwingli was on a path of reform preaching when he began to question or criticize such Catholic practices as tithes, the mass, and even infant baptism.  Zwingli had gathered a group of reform-minded men around him, with whom he studied Classic literature and the Scriptures.  However, some of these young men began to feel that Zwingli was not moving fast enough in his reform.  The division between Zwingli and his more radical disciples became apparent in an October, 1523 disputation held in Zurich.  When the discussion of the mass was about to be ended without making any actual change in practice, Conrad Grebel stood up and asked “what should be done about the mass?” Zwingli responded by saying the City Council would make that decision.  At this point, Simon Stumpf, a radical priest from Hongg, answered saying, “The decision has already been made by the Spirit of God.” Seeking fellowship with other reform-minded people, the radical group wrote letters to Martin Luther, Andreas Karlstadt, and Thomas Müntzer.  Felix Manz began to publish some of Karlstadt’s writings in Zurich in late 1524.  By this time the question of infant baptism had become agitated and the Zurich City Council had instructed Zwingli to meet weekly with those who rejected infant baptism “until the matter could be resolved.”  Zwingli broke off the meetings after two sessions, and Felix Manz petitioned the Council to find a solution, since he felt Zwingli was too hard to work with.  The Council then called a meeting for January 17, 1525.

The Council ruled in this meeting that all who continued to refuse to baptize their infants should be expelled from Zurich if they did not have them baptized within one week.  Since Conrad Grebel had refused to baptize his daughter Rachel, born on January 5, 1525, the Council decision was extremely personal to him and others who had not baptized their children.  Thus, when sixteen of the radicals met on Sunday evening, January 21, 1525, in the home of Felix Manz’s mother the situation seemed particularly dark.  The Hutterian Chronicle records the event:

After prayer, George of the House of Jacob (George Blaurock) stood up and besought Conrad Grebel for God’s sake to baptize him with the true Christian baptism upon his faith and knowledge.  And when he knelt down with such a request and desire, Conrad baptized him, since at that time there was no ordained minister to perform such work.

After Blaurock was baptized, he in turn baptized others at the meeting.  Even though some had rejected infant baptism before this date, these baptisms marked the first re-baptisms of those who had been baptized as infants and thus, technically, Swiss Anabaptism was born on that day.  This made complete the break with Ulrich Zwingli and the Zurich City Council, and formed the first church of the Radical Reformation. Protestations und Schutzchrift, A Defense of Anabaptism, by Felix Manz presented to the Zurich City Council.

In the meantime, City Council enacted legislation which produced wide-scale persecution of the Brethren.  The government feared that the ‘civil disobedience’ of the Anabaptists would split the church further, produce contempt for the government and that it could potentially become more and more difficult to find conscripts for the military.

While there was a variety of viewpoints among 16th-century Anabaptists, and despite important differences of nuance even where Anabaptists appear to be similar, one can identify some themes held in common following the crystallization of the movement between 1527 and 1540:

1. All shared a basically synergistic view of salvation (human and divine “cooperation”).
2. Justification was seen as a progression in holiness; the ethic of Jesus Christ’s Sermon …on the Mount.was the guide to it.
3. Baptism was considered to be the sign of lay emancipation from clerical control and …the spiritual enfranchisement of lay people (priesthood of all believers).