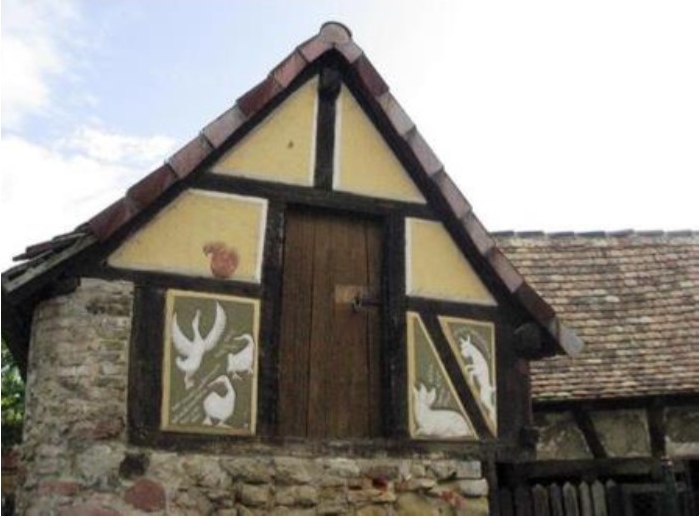 While our ancestors were living in Ibersheim, this was not necessarily a quiet refuge for them.  They may have escaped persecution in the Zurich area, but they still faced challenges during the period that they lived here.

The time of the coming of the first Anabaptists cannot be specifically determined; however it is generally understood that they originally came from the region of Bern, Switzerland, and probably came after the Thirty Years’ War, likely in the 1650s.  As had been mentioned in a previous Post, the land had been devastated and depopulated by the war.  The great electoral estates in and around Ibersheim had been abandoned.  The immigrant Anabaptist Brethren were welcomed as capable farmers to reclaim this land.  It was to the advantage of the Ibersheim Mennonites that they received 12-year leases for the crown estate from the elector, giving them a different status from the other Mennonite congregations. Built in 1836 on the site of the original church building, this building is the second one for the Ibersheim Mennonite Church.
Photo credit: Dave Heise

Ibersheim was probably the oldest of the Mennonite churches established after the Thirty Years’ War in the Palatinate west of the Rhine.  The Brethren felt comfortable worshiping in a public building in Ibersheim as they had been accepted as subjects of the Palatinate based on a general “Mennonite Concession” that they signed in 1664.  Upon this Concession all subsequent decisions and measures by the government concerning the Mennonites were based.  It stated: “That they may for the sake of their faith, for which they are not to be molested, hold no public or private meetings or conventicles attended by others that do not live on the estate, much less attract and mislead others of our subjects

However, the charge was soon made that they abused the elector’s grace.  In May 1671 Inspector and Dean Johannes Jakob Löffler of Osthofen accused them of having baptized a member of the Reformed Church.  Investigation revealed that a Jakob Weber, whose grandparents had, however, been Mennonites, had indeed been baptized.  The congregation at Ibersheim was fined.  They were now secretly but closely watched to note any transgressions against the Concession of 1664.  It was observed that 50-100 Mennonites attended their services, whereas the Concession allowed only 20 to meet together.  Upon a petition signed by all the Mennonites it was decided to modify the wording to permit 20 families instead of 20 persons.

It wasn’t just the 30 Years’ War, persecution in Switzerland, or even conflicts with the local government in Ibersheim.  One last tumultuous event took place in our ancestors’ midst: the 9 Years’ War, culminating in the Palatinate War of Succession in 1698.  In October 1693, 12 Mennonite families including 3 hereditary tenants, all of Swiss origin, went into exile to Friedrichstadt (Schleswig-Holstein), where there was a settlement of Anabaptists.  They returned to Ibersheim only after the end of the Palatinate War of Succession in April 1698. ,

Was the Inspector Dean’s accusations and this latest conflict what finally drove our ancestors to leave?  We may never know what defining moment finally initiated their trek to the New World, but it is evident that religious persecution is what drove them to seek a new life.  When they learned of William Penn’s grand experiment, it must have been very inviting to them.