Saturday August 3rd was a beautiful day for a family reunion and many from across the nation came to Lancaster to join in on the celebration of our 97th annual Brubaker Families of America family reunion.  We had cousins join us from as far away as Florida, Texas, and California!

Held annually on the land of the original property patented and warranted from William Penn to Hans Brubaker, this year’s reunion at Bachman Hall on the campus of Homestead Village featured a wonderfully talented and varied group of speakers.  The presentations were both geographically and culturally diverse.  Due to advance interest and numerous requests from both attendees and those who could not attend, we have recorded the speakers’ presentations and have them available to view.

On display were tables with various Brubacher-Brubaker family trees, memorabilia, merchandise, photos, and such, including our Amish cousins.  There was an online station showing the Family Association website.

Our featured speakers this year were David Brubacher from Cooksville, ON, David Brubaker and his son Jay Lloyd Brubaker from Southern CA, and Darvin Martin, from Brownstown, Lancaster County, PA.

A living connection from the past to the present: Robert Brubaker Noll, who as an infant attended the 2nd annual reunion in 1920.

David from Ontario presented The Brubachers and Canada – Land of Opportunity about the early migration of our Brubacher-Brubaker ancestors and cousins from Lancaster County to Ontario.  He also shared of the attractions and beauty of his home area as we are considering holding our 100th annual Reunion in Ontario in 2022.  This will be the first time since 1923 that we will have had our annual Reunion there*.

Presenting From Lancaster to Los Angeles… A Story That Could Only Happen in Hollywood, Dave and Jay shared the story of Lloyd Burkholder Brubaker, father and grandfather, and his journey from Lancaster, PA to Hollywood.  As Dave said in his presentation, Hollywood’s stories are fiction.  However, his father’s “Once Upon a Time in Hollywood” story isn’t fiction, it’s real.

Our third speaker, cousin Darvin Martin, is no stranger to our events, as a participant or as a speaker and presenter.  A noted scientist, researcher, and historian, Darvin presented on The Early Brubaker Immigrants and Native Americans, telling of our Brubacher-Brubaker ancestors who came to the New World.  It was presented in the context of their settling among and relating to the Native Americans who lived in the area, along with the events and happenings that helped to form our world that we know today in Lancaster County and beyond.

Be sure to mark your calendar for next year, Saturday August 1st, 2020 for our 98th annual Brubaker Family Reunion!

Brubachers and Canada as a Land of Opportunity 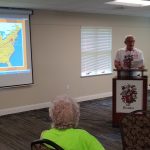 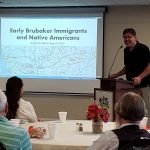 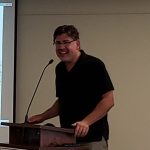