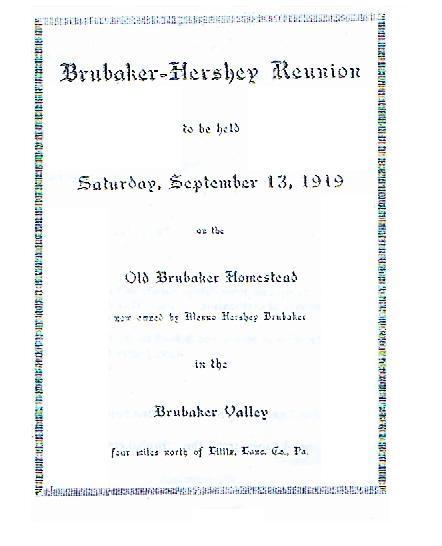 The first joint Brubaker-Hershey reunion was held in 1919, 202 years after the first Brubaker and the first Hershey immigrants came to North America. Sixty-two year old Menno Hershey Brubaker, a descendant of both immigrants Hans Brubaker and Christian Hershey, conceived of the idea of celebrating a reunion of these two extended families.

On September 13th, 1919, approximately 2500 people met on his farm, located in Elizabeth Township, near the village of Brickerville, in Lancaster County, PA.  It was fitting that this first reunion was held on land that was in continuous Brubaker family ownership since immigrant Hans Brubaker originally purchased the initial 300 acres of this tract on September 20th, 1731.

The second and last joint Brubaker-Hershey family reunion was held outside the village of Rohrerstown, in East Hempfield Township, just west of the city of Lancaster on the farm of Levi H. Brubaker on September 4th, 1920.  This farm, situated on the original 1000 acres purchased jointly by Hans Brubaker and Christian Hershey in 1717, remained in Brubaker family ownership until the 1970’s when it was sold to the United Church of Christ for the building of Homestead Village Retirement Community and the Church of the Apostles United Church of Christ.